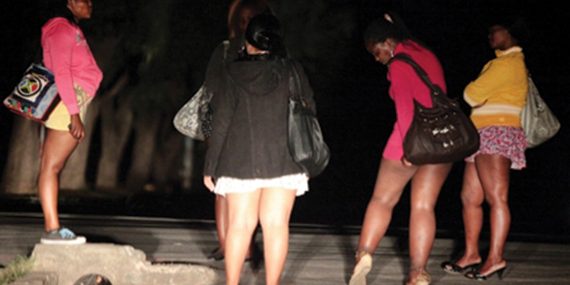 FROM a distance, she is an ordinary vendor selling bottled water in the sweltering heat of Chirundu, but she is also a commercial sex worker.

Prudence (42) is one of many sex workers who operate at Chirundu Border Post and has been in the trade for over 20 years having bedded more 1 000 men from every tribe in the Sadc region.

“The water I sell is a disguise so that I can easily manoeuvre and do my business,” she said.

“It also helps me ensure that my children do not suspect me of anything like sex work. But I am a sex worker who has managed to build a house for my children and pay school fees for them.”

Her skin has aged, and so has her skill in her trade, which she says has improved due experience and exposure to a variety of clients.

Prudence is a member of the Centre for Sexual Health and HIV and Aids research in Zimbabwe, (CeSHHAR), a non-government organisation that helps sex workers avoid abuse and other forms of ill treatment.

She said with age, she is now able to negotiate for safe sex and tackle abuse.

“Before I joined CeSSHHAR, I was being abused by men who demanded unprotected sex. Some would forcefully remove the condom and others were refusing to pay after getting my service,” Prudence said.

She is one of the oldest sex workers in the area who now commands respect and has a permanent clientele base.

Despite the pain and abuse associated with the trade, Prudence is at least happy that she has put some of her earnings from prostitution to good use.
“I have done everything and met with different types of men. Some are abusive and others just want sex for no money.

“I think it is time I quit. I have bedded many, more than 1 000 and I have achieved a lot. I now have a seven-roomed house which I built from the proceeds of sex work,” Prudence said as she recounted her life story recently to journalists who visited the area under the banner of the National Aids Council (NAC).

With training from CeSHHAR, Prudence and her colleagues now know their HIV status and have been empowered to negotiate for safe sex-closing the tap for new HIV infections.

“This business of selling water provides me with extra revenue which if I don’t get a man to sleep with, I will not stress myself. I have lost appetite for man and I think it is now time I call it a day and find something else to do,” she said.

Before being empowered on safe sex and how to deal with abuse, Prudence like her counterparts, suffered on numerous occasions with sexually transmitted infections.

“Some men offer as much as $20 per night and demand that you have unprotected sex with them. Because of poverty and inability to negotiate for safe sex, I used to agree to that. This exposed me to STIs,” Prudence said.

Chirundu Border town in the last two months has recorded 129 cases of STIs among the 1 013 sex workers who are registered said Varaidzo Muchina, the representative for CeSHHAR based in the border town.

Through engagement with sex workers, at least 167 of them have been tested for HIV and Aids and those who turned out to be positive have been initiated on anti-retroviral drugs.

“The biggest challenge that we have is tracing most of our clients as a number of them are mobile. They travel across Sadc and in some cases some default,” she said.

CeSHHAR also has a strong commitment to strengthening research capacity among Zimbabwean graduates in HIV-related issues.

Statistics released by the NAC indicate that Zimbabwe’s border towns continue acting as breeding grounds to the pandemic and CeSHHAR had taken it upon themselves to fight new infectious in these areas.

The large numbers of people who pass through border towns as they trade or look for greener pastures in neighbouring countries has resulted in commercial sex becoming big business in the town.

As a result, border towns have been transformed from business hubs to breeding grounds of sexually transmitted diseases, especially HIV. Through its various projects that include educational programs, sex workers now can access condoms and get treatment to those who would have tested positive.

Muchina said most of the women had confirmed that they engage in unprotected sex which guarantees them more money.

“However, it is encouraging that we are getting a positive response in behavioural change from these communities as we continue to conscientise them about the dangers of indulging in unprotected sex,” she said.

Activists have been calling for behavioural change as the best way of effectively combating HIV and Aids.

Prevention remains the pillar of HIV interventions in Zimbabwe.

The programme also seek to address the needs and vulnerabilities of workers in the informal economy who do not have access to coping mechanisms to mitigate the impact of the disease, such as lack of access to social protection and income.

In Zimbabwe, sex workers have been regarded as a key population with high risk of HIV infections.

According to latest statistics from the Ministry of Health and Child Care, new HIV cases were more prevalent among long distant truck drivers, sex workers, prisoners and adolescents.

The truck drivers who ply the Beitbridge-Harare-Chirundu Highway have, for years been preying on under-age and vulnerable girls in the border towns of Beitbridge, Victoria Falls and Chirundu.

Recently, the NAC also estimated the number of children involved in sexual exploitation in Zimbabwe was about 160 000.

Besides empowering them with information on safe sex and sustainability, Ceshhar is also involved in fighting gender based violence.

Join us to know about research findings on the impact of #selfstigma in #HIV and our learnings from the Wakakosha (I’m Worth it) program in our #webinar happening on June 29th, 2022 from 2 pm to 3 pm Zimbabwe time/1 pm to 2 pm Ireland time.

Did you know that you can report SGBV on these toll free lines @AdultRapeClinic at 08080472 and the national GBV call centre at 575. @UNFPA_Zimbabwe @CeSHHAR @GlobalSpotlight

1/3 At the ongoing Sexual and Gender based Violence training our programs officer spoke on the importance of creating safe spaces for vulnerable and marginalised people to discuss gender-based violence is a critical starting point.

Do you think self-stigma impacts the way we live?
Join us in our first webinar in the #GoodEnoughwebinar series for a conversation regarding the impact of self-stigma in young adults living with HIV. Happening on 29th June 2022.
Register today - https://us06web.zoom.us/meeting/register/tZwuf--hqT4rE9KIQk8ZMria-wfOmKEHmltS

The National SIE Officer will be responsible for improving the quality of data generated by Regional SIE Officers & ensuring accurate data entry and timely reporting http://www.facebook.com/CeSHHAR.Zim